If you’re looking to add a certain typographic touch to your next website design, then make sure to check out these 30 Best Free Google Web Fonts.

Use the 30 best free Google web fonts and stop wasting your time!

It can be a really daunting task searching for the perfect web font to incorporate in your web design project. Let’s be honest, the absolute champ when it comes to free web fonts is the Google web font API. This is the reason why I have decided to group, in my opinion, the all time top 30 free web fonts Google has to offer. Make sure to bookmark this post if you’d like to use this list as a reference for all your web design projects to come. 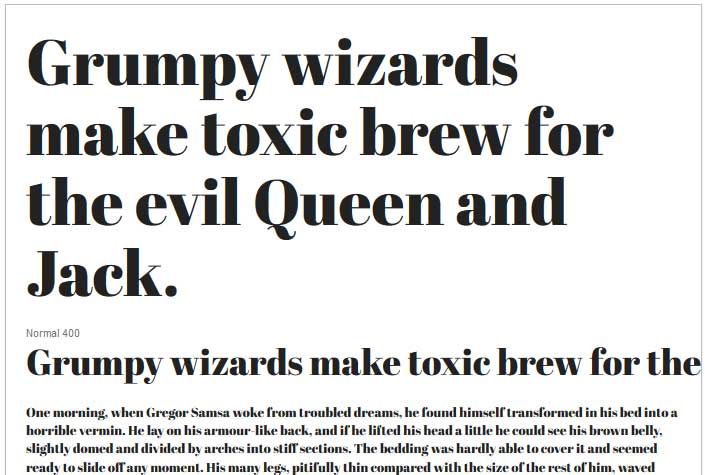 Abril Fatface is part of a bigger type family system, Abril, which includes 18 styles for all Display and Text uses. The titling weights are a contemporary revamp of classic Didone styles, display both neutrality and strong presence on the page to attract reader attention with measured tension by its curves, good color and high contrast. 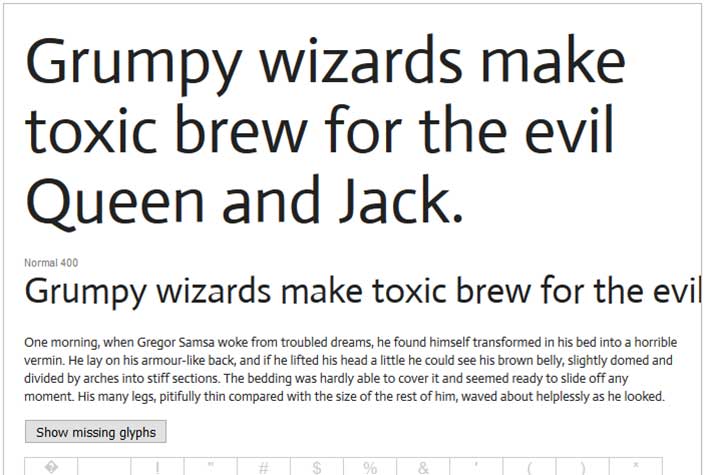 A diploma thesis project from the Aachen University of Applied Sciences at Karl-Friedrich (Kai) Oetzbach. The font originated in a course in type design. The idea was to learn through the creation of a typeface about writing as an information carrier. It was created entirely digitally, so the path to the current version is very rocky and winding. 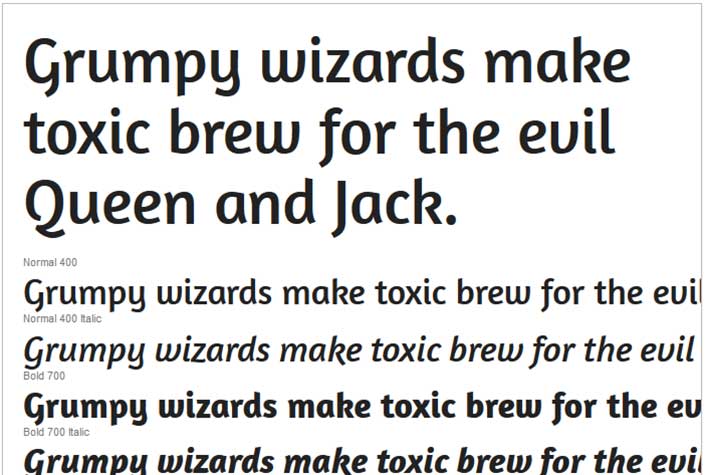 The Amaranth family is a friendly upright italic design with a slight contrast and distinctive curves. With its three new styles Amaranth is healthy for all your texts too! 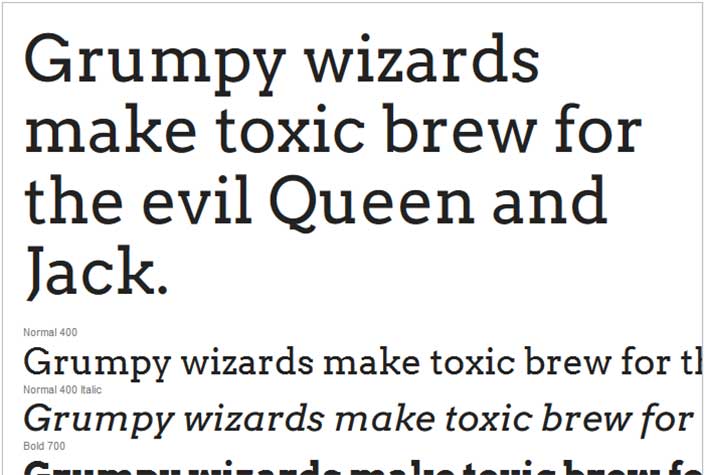 Arvo is a geometric slab-serif typeface family suited for screen and print. The family includes 4 cuts: Roman, Italic, Roman Bold, Bold Italic. It is a libre font, first published in Google Fonts. The flavour of the font is rather mixed. Its monolinear-ish, but has a tiny bit of contrast (which increases the legibility a little in Mac OS X.) 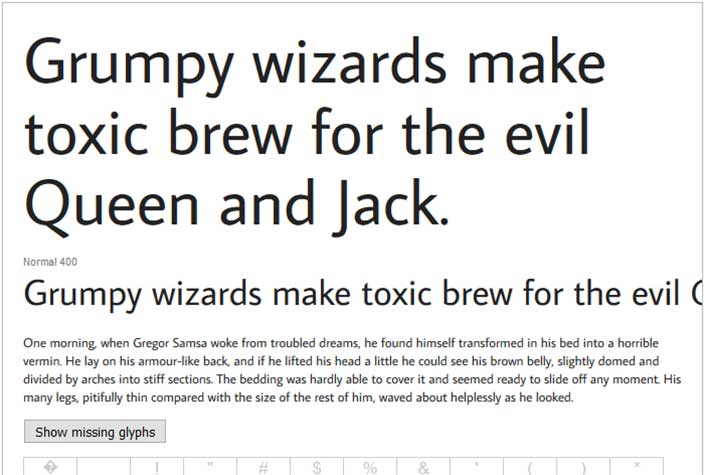 Average Sans has the color, structure and proportions of its serif sister family, Average, which it complements harmoniously. The neutrality of the forms create a nice texture, both for texts and short headlines. Use it for online magazines, academic texts and blogs. 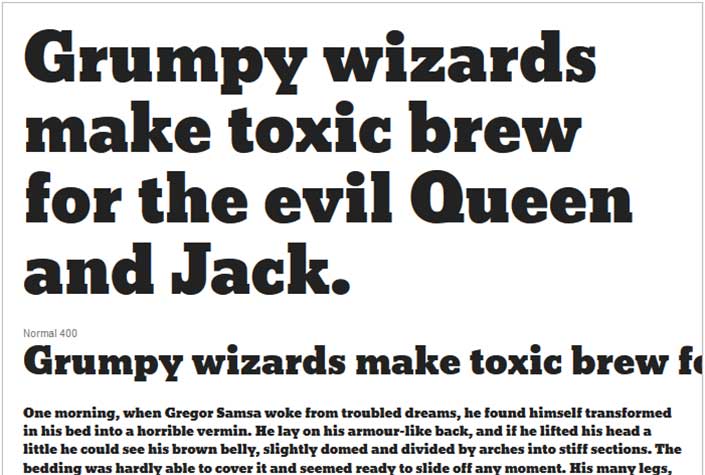 Bevan is a reworking of a traditional slab serif display typeface created by Heinrich Jost in the 1930s. In Bevan, Jost’s earlier letter forms have been digitised and then reshaped for use as a webfont, the counters have been opened up a little and the stems optimised for use as bold display font in modern web browsers. 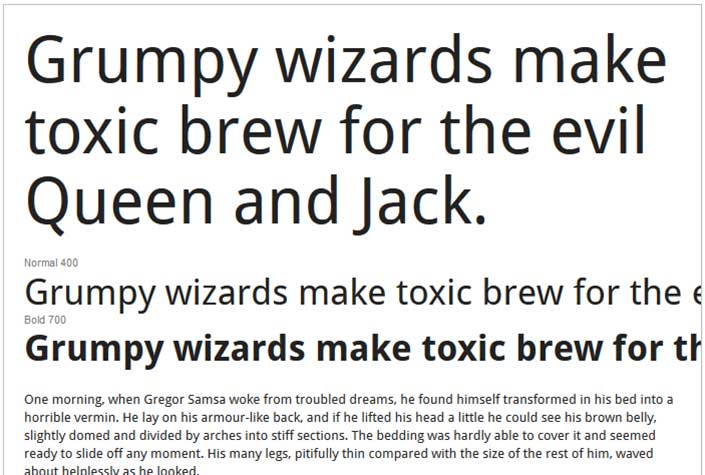 Droid Sans is a humanist sans serif typeface designed by Steve Matteson, Type Director of Ascender Corp. Droid Sans was designed with an upright stress, open forms and a neutral, yet friendly appearance. Droid Sans was optimized for user interfaces and to be comfortable for reading on a mobile handset in menus, web browser and other screen text. 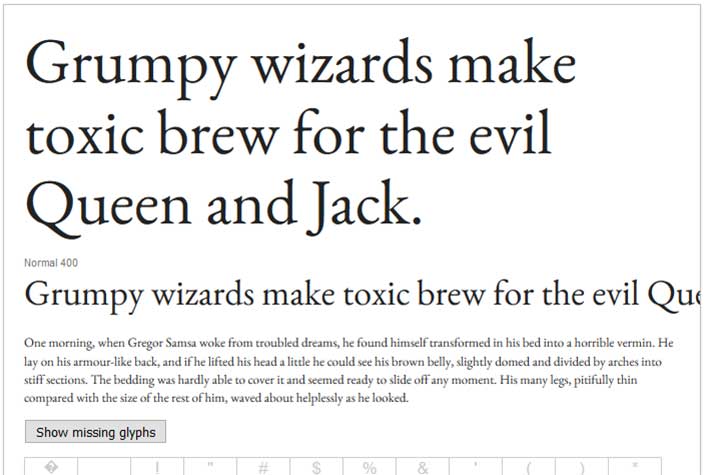 Garamont’s fonts have set a milestone, on which font designers have been recurring ever since. EB Garamond is an open source project to create a revival of Claude Garamont’s famous humanist typeface from the mid-16th century. Its design reproduces the original design by Claude Garamont: The source for the letterforms is a scan of a specimen known as the “Berner specimen”, which, composed in 1592 by Conrad Berner, son-in-law of Christian Egenolff and his successor at the Egenolff print office, shows Garamont’s roman and Granjon’s italic fonts at different sizes. Hence the name of this project: Egenolff-Berner Garamond. 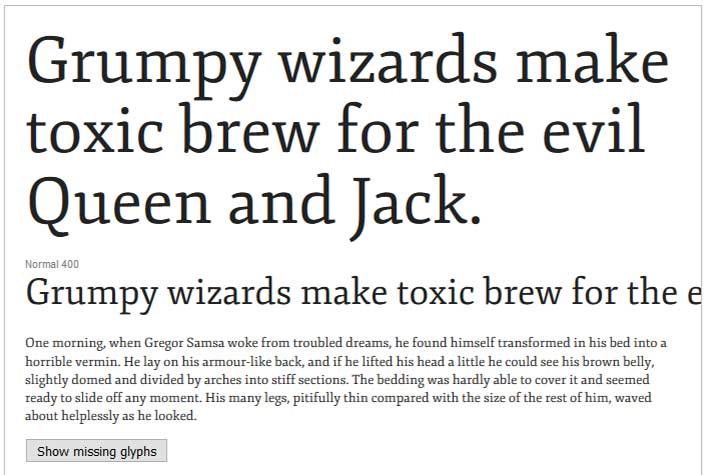 Fjord is a serif typeface, originally designed with printed books in mind, and particularly intended for long texts in small print sizes. Fjord features sturdy construction, prominent serifs, low-contrast modulation and long elegant ascenders and descenders relative to the ‘x’ height. Fjord performs well in sizes form 12 px and higher but because of its original design and careful detailing Fjord can also be a distinctive font choice for larger text headlines and in corporate design. Fjord is inspired by the feeling found in both renaissance and contemporary typeface design. 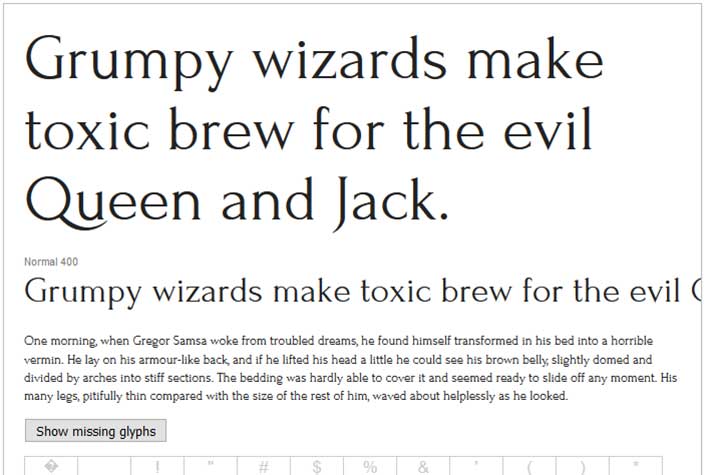 Forum has antique, classic “Roman” proportions. It can be used to set body texts and works well in titles and headlines too. It is truly multilingual, with glyphs for Central and Eastern Europe, Baltics, Cyrillic and Asian Cyrillic communities. 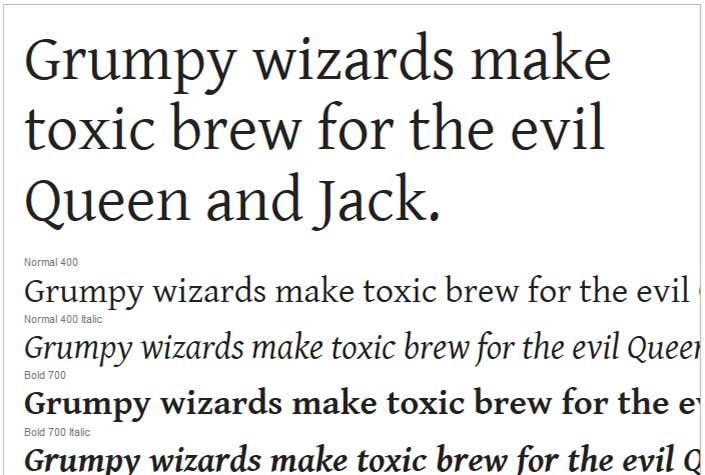 The Gentium Basic font family is based on the original Gentium design, but with additional weights. The family comes with a complete regular, bold, italic and bold italic set of fonts. 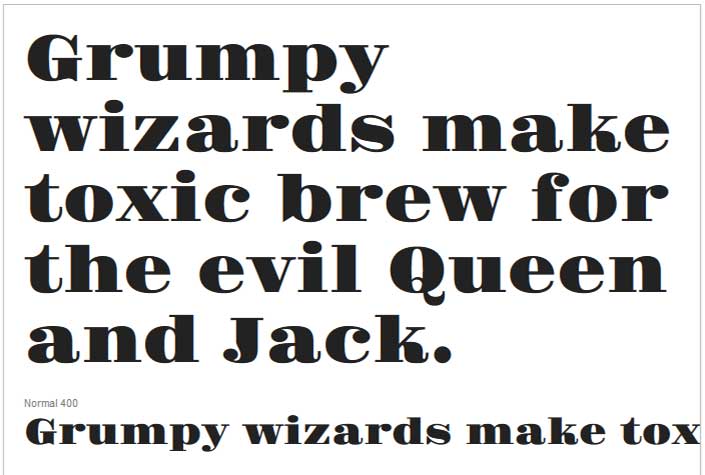 Gravitas One is modeled on the “UK fat face” which is a kind of very heavy advertising type created during the industrial revolution in England. The letter forms are characterized by an attention getting and strong contrast between the very heavy vertical shapes and the thin horizontal ones. The contrast of the design means that it will be most useful when set from medium to large sizes. 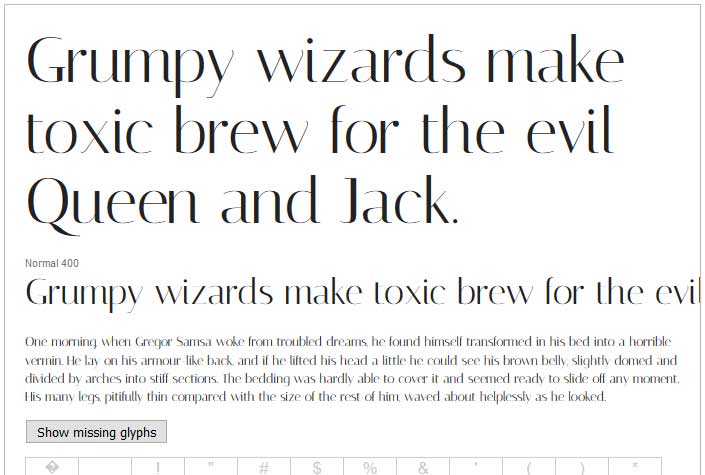 Italiana was designed for use in the headlines of newspapers and magazines. Italiana is inspired by the calligraphy of the Italian masters. It is suitable for design solutions that require elegance and sophistication. It was conceived with modern proportions that make it great for economical typesetting both on paper and on screen. 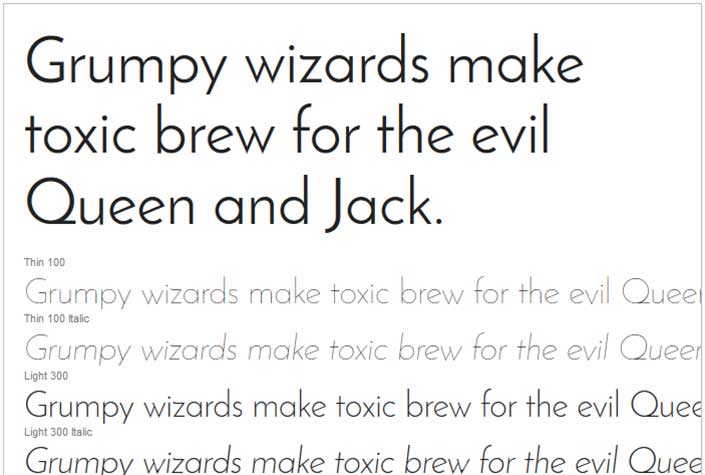 The idea for creating this typeface was to make it geometric, elegant and kind of vintage, especially for titling. It is inspired by Rudolf Koch’s Kabel (1927), Rudolf Wolf’s Memphis (1930), Paul Renner’s Futura (1927). 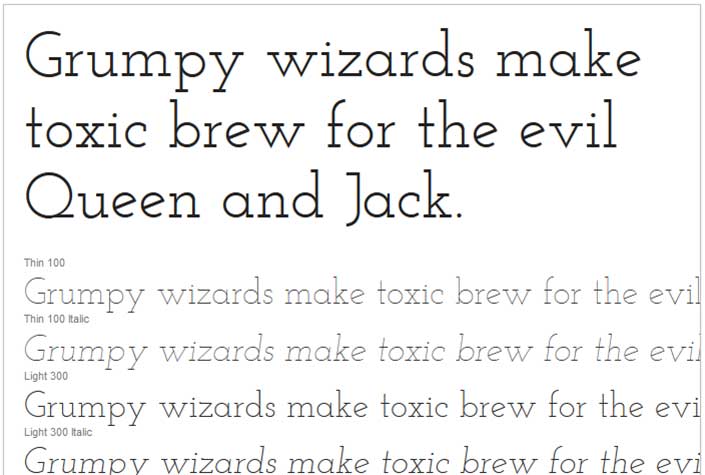 Josefin Slab was the first typeface–at least in my mind–I designed! But I decided to start simple with Josefin Sans. Following the 1930s trend for geometric typefaces, it just came to me that something between Kabel and Memphis with modern details will look great. 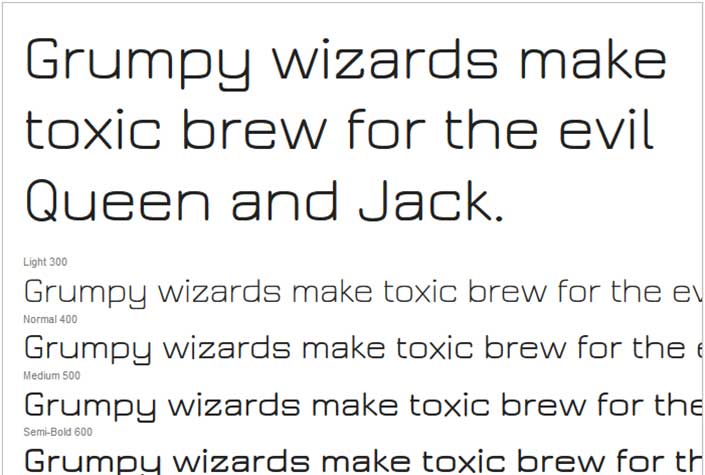 Jura is a family of sans-serif fonts in the Eurostile vein. It was originally inspired by some work I was doing for the FreeFont project in designing a Kayah Li range for FreeMono. I wanted to create a Roman alphabet using the same kinds of strokes and curves as the Kayah Li glyphs, and thus Jura was born. It has been expanded to include glyphs for the Cyrillic and Greek alphabets as well. 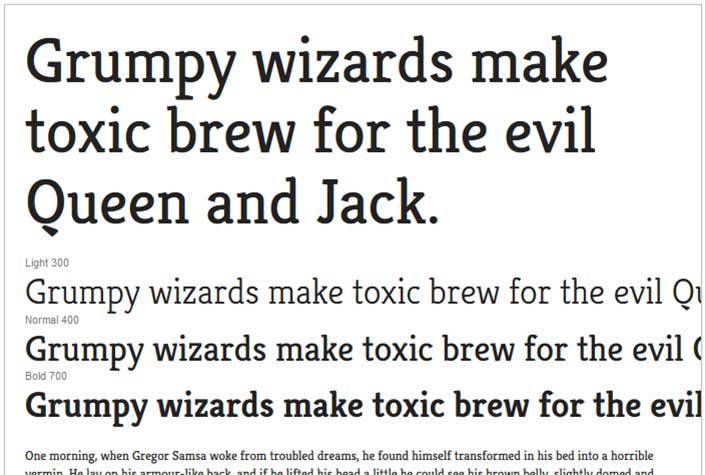 Kreon targets text typesetting for magazines and news sites. With a slight slab-serif look and the low contrast design, it is a sturdy typeface for your website, blog or online magazine. Its friendly feel will soon be accompanied by a sans serif as well as italics. Enjoy. 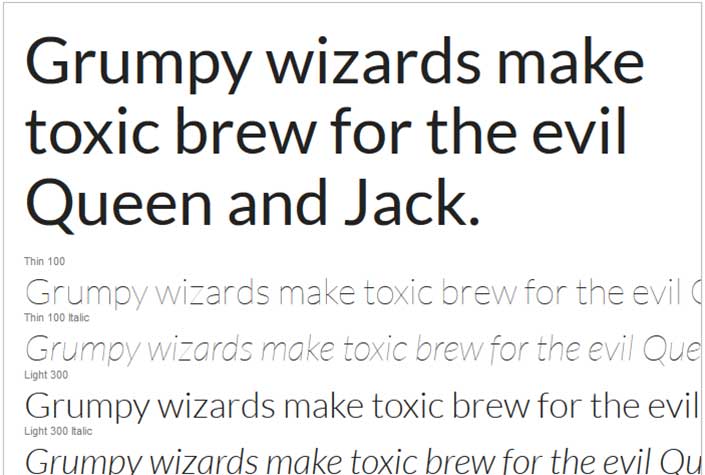 Lato is a sans serif typeface family started in the summer of 2010 by Warsaw-based designer Łukasz Dziedzic (“Lato” means “Summer” in Polish). In December 2010 the Lato family was published under the Open Font License by his foundry tyPoland, with support from Google. 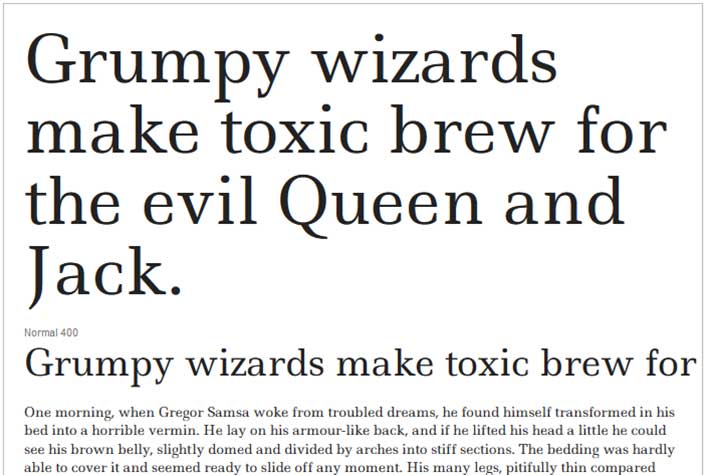 The austere and concise personality and flexibility make it a real multiple-purpose typeface. The letter forms are distinguished by a large x-height, sufficient stroke contrast, robust but elegant wedge-like serifs and terminals. These features have been specially designed to reach maximum of quality and readability when used in unfavorable print and display processes – such as in newspapers, laser printed documents and on low resolution screens. The typeface can be qualified as matched to modern trends of type design and of enhanced legibility. These characteristics provide an undeniable distinction to the typeface, making it suitable for editorial use in newspapers and magazines, corporate ID, advertising and display typography. 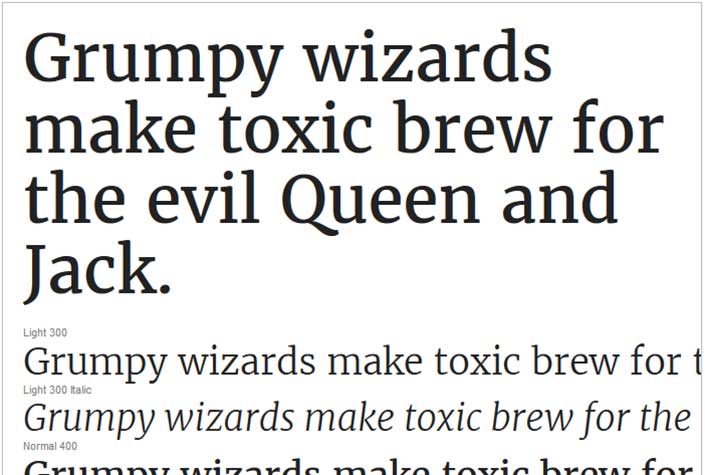 Merriweather was designed to be a text face that is pleasant to read on screens. 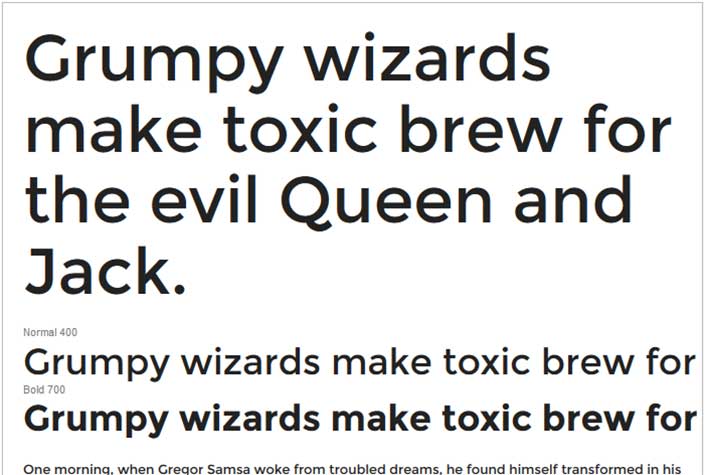 The old posters and signs in the traditional neighborhood of Buenos Aires called Montserrat inspired me to design a typeface that rescues the beauty of urban typography from the first half of the twentieth century. The goal is to rescue what is in Montserrat and set it free, under a free, libre and open source license, the SIL Open Font License. 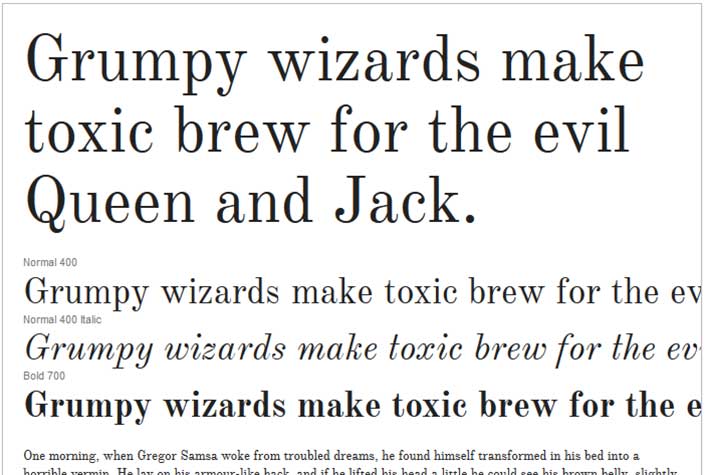 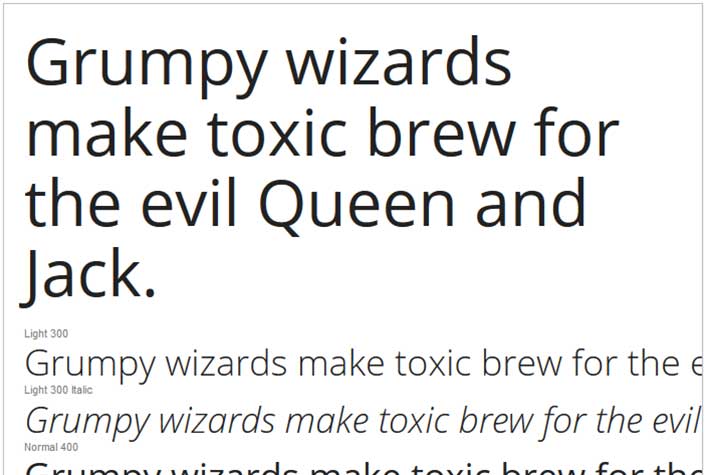 Open Sans is a humanist sans serif typeface designed by Steve Matteson, Type Director of Ascender Corp. This version contains the complete 897 character set, which includes the standard ISO Latin 1, Latin CE, Greek and Cyrillic character sets. Open Sans was designed with an upright stress, open forms and a neutral, yet friendly appearance. It was optimized for print, web, and mobile interfaces, and has excellent legibility characteristics in its letterforms. 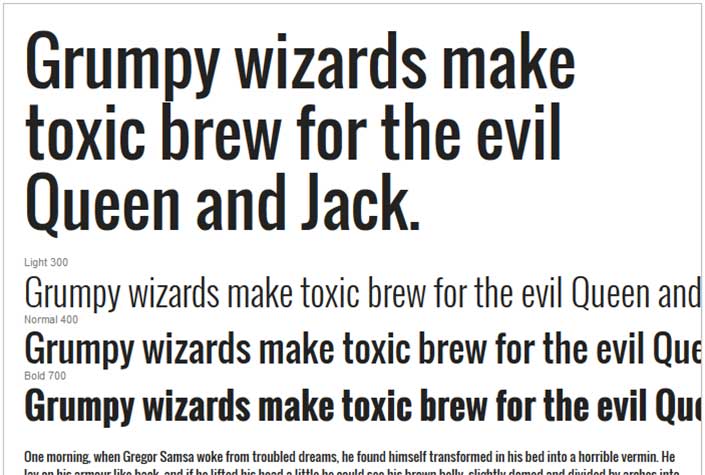 Oswald is a reworking of the classic style historically represented by the ‘Alternate Gothic’ sans serif typefaces. The characters of Oswald have been re-drawn and reformed to better fit the pixel grid of standard digital screens. Oswald is designed to be used freely across the internet by web browsers on desktop computers, laptops and mobile devices. 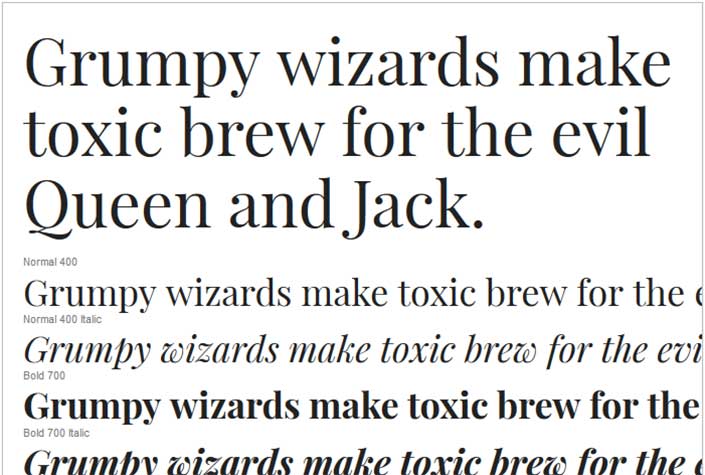 Playfair is a transitional design. From the time of enlightenment in the late 18th century, the broad nib quills were replaced by pointed steel pens. This influenced typographical letterforms to become increasingly detached from the written ones. Developments in printing technology, ink, and paper making, made it possible to print letterforms of high contrast and delicate hairlines. 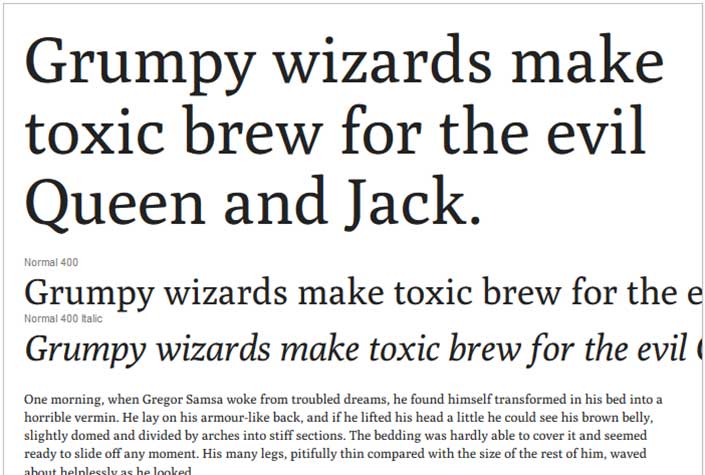 Poly is a medium contrast serif font. With short ascenders and a very high x-height, Poly is efficient in small sizes. Thanks to its careful balance between the x-height and glyph widths, it allows more economy and legibility than standard web serifs, even in small sizes. This font was originally designed to compose texts in agglutinative languages; these contain very long words. The goal was to develop a typeface that would tolerate cramped tracking and that would increase the number of letters on a single line. 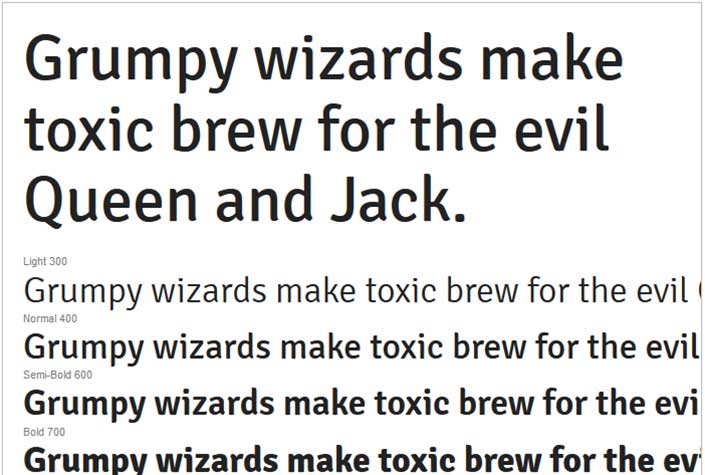 Signika is a sans-serif with a gentle character, developed for wayfinding, signage, and other media where clarity of information is required. It has a low contrast and tall x-height to improve readability of texts in small sizes as well as in large distances from the reader. Being a typical signage typeface it is inspired by typefaces such as Ronnia, Meta, and Tahoma. 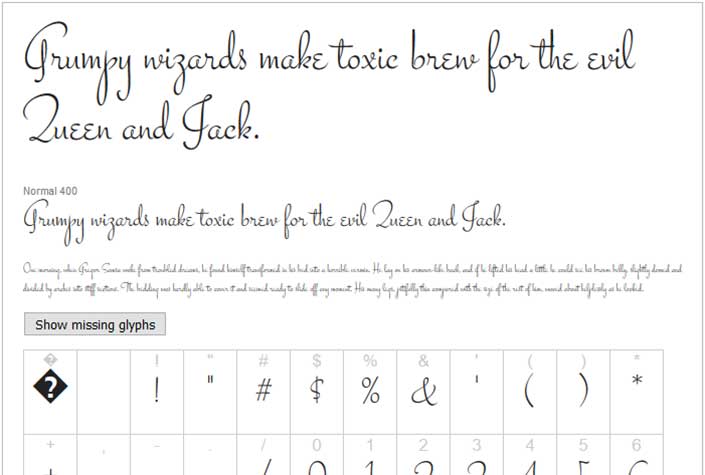 Stalemate is a script of vintage origins but still modern flair. This script exudes confidence and carefree attitude and makes a bold statement in any design. 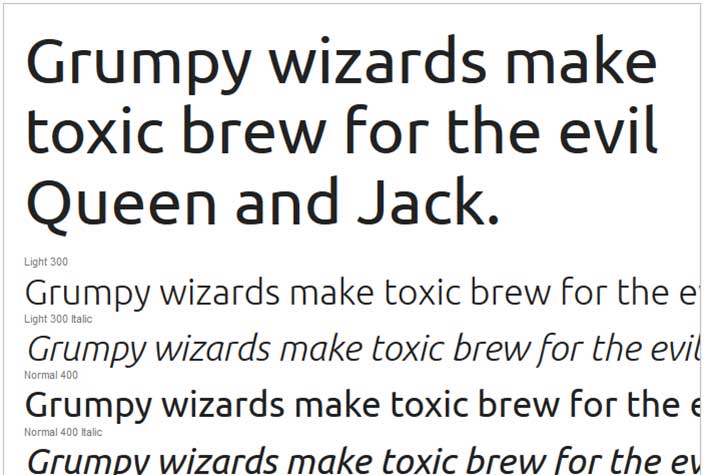 The Ubuntu Font Family are a set of matching new libre/open fonts in development during 2010-2011. The development is being funded by Canonical Ltd on behalf the wider Free Software community and the Ubuntu project. The technical font design work and implementation is being undertaken by Dalton Maag. 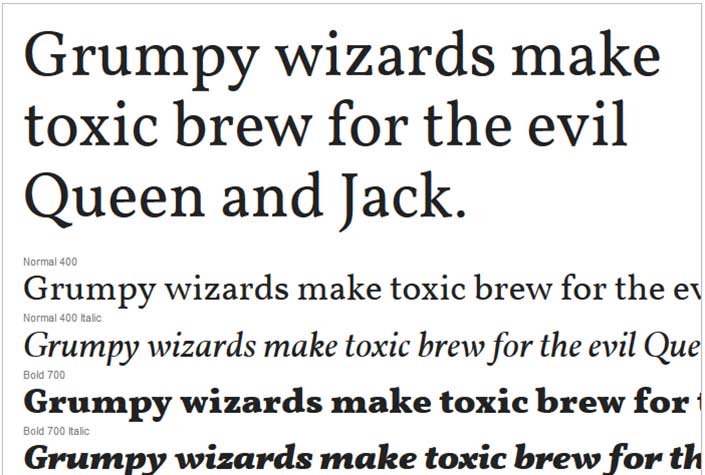 Vollkorn came into being as my first type designing attempt. I published the Regular in 2005 under a Creative-Commons-License. Until the counter finally collapsed two years later it had been downloaded thousands of times and used for web and print matters. It intends to be a quiet, modest and well working text face for bread and butter use. Unlike its examples in the book faces from the renaissance until today, it has dark and meaty serifs and a bouncing and healthy look. It might be used as body type as well as for headlines or titles. »Vollkorn« (pronounced »Follkorn«) is German for »wholemeal« which refers to the old term »Brotschrift«. It stood for the small fonts for every day use in hand setting times.

Hope you find this one useful! See you guys next time.